The first two posts in my blog series on the top myths around robotic process automation (RPA) called out the biggest myth in the RPA biz and set the record straight on whether it’s all really just about cut-throat cost-savings (spoiler alert: it’s not). This time around, I’m tackling a less-controversial, but equally common myth about RPA: is it actually just another flavor of Artificial Intelligence (AI)?

What’s the Rush on RPA?
Stepping back for a second, part of the reason that RPA & AI are so often confused for each other has something to do with the semi-sudden global interest in RPA. Even though the underlying technologies have been around for decades, in the last several years, global spending on RPA software has been doubling annually. This phenomenon has effectively served to lower the bar for implementation; reducing costs, creating new efficiencies, improving ease of use and the proliferation of vendors with expertise in the technology right along with it.

Which brings me to how this ties into RPA/AI confusion: The shift to RPA also coincides with a worldwide eagerness across industries to take full advantage of the promise of AI and Machine Learning. For many, RPA serves as a necessary/less intimidating first-step toward true AI. Once smaller, more routine parts of a process or workflow are running autonomously, the addition of AI technology can be integrated to deliver more complex, cognitive automation.

RPA ≠ AI
While RPA and AI often work in concert, they are fundamentally different technologies. So, how to spot the difference? One is each technology’s approach to actions. For RPA, actions are taken to perform tasks in a process in a set number of ways, in set intervals. Whereas, as it applies to AI, actions are not necessarily process-based at all. AI and ML algorithms are data-driven and trained on sample datasets on how to perform the work they are designed to do. They are then put to work inside operational workflows to make decisions.

Another key difference is the way in which RPA and AI differ on requirements. RPA requires little-to-no subjective decision-making. AI, on the other hand, requires active decision-making with some degree of “thinking” and “learning” relative to natural language, reasoning, judgment, context and providing insights.

Our own work in this area serves as an example. For a client that provides in-office infusion services, we worked to automate claims management and billing processes. The project used RPA to automate the work involved in claim status checks, claims settlement and EOB retrieval which had previously be completed manually. Tasks like logging in to 10-15 different payor websites, searching for and retrieving documents and then downloading or saving to PDF and storing in an organized folder structure are now handled by a bot.

Were we to take things a few steps further and build a predictive model that could identify and flag claims likely to be delayed or denied based on the information in the stored documents, AI would be required to “read” the documents and extract the pertinent information needed to make a determination. Based on the data, AI would then “decide” if the claim in question should be flagged as likely to be delayed or denied. This would make it possible to proactively work the claim to improve revenue flow and “learn” how to improve accuracy over time based on the accuracy of those decisions.

RPA + AI
As noted above, even though they are distinct technologies, AI can play a role in advancing the capabilities of RPA. Added to a high-performing RPA process, AI and ML can augment the human workforce (not replace it!) with digital labor by performing complete business functions from start to finish. 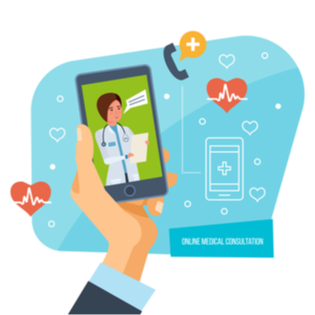